If you’ve been thinking that you don’t quite have the full picture when it comes to your clients’ true stress load, it might be time to take a deeper look at their electrolyte balance. Using electrolytes as markers could identify many causes of stress in the body – from infection to exercise, and more. Read on to discover how electrolytes work in the body and how they can be used as an indicator of hidden health trends.

What is an electrolyte and how does it work in the body?

An electrolyte is a substance that breaks down into ions (positive and negative charged particles) when in a solution that is capable of electric signaling. They are involved in muscle contraction, heart function, endocrine secretion, regulating osmotic balance, buffering body fluids, controlling acid/base balance.

Electrolyte markers include Sodium, Potassium, Chloride, Co2, Magnesium, Calcium and Phosphate[i]. In this article we will be focusing on the first 4 of these.

How can electrolytes be used as an indicator of hidden health trends?

Potassium is generally considered to have protective effects, linked to its blood pressure lowering capacities and inhibitory effects on free radical genesis.

Minimal decrease in serum K (0.3 mEq/L) following increase in blood glucose or insulin can decrease aldosterone by as much as 50%, independently of sodium intake[ii]. Aldosterone mediates the exchange of K and Na in the distal renal tubule cells. Aldosterone deficiency is known to result in hyperkalemia (>5.5 mmol/L), while aldosterone excess is associated with hypokalemia (<3.5 mmol/L)[iii].

When aldosterone is mediated by rises in potassium, it is the first line of defense against hyperkalemia[iv].

What can affect aldosterone?

Severe loss of bodily fluids through diarrhoea and vomiting can affect all electrolytes.

Optimal Potassium range research suggests[ix] that even deviations within the normal K range were associated with an increased mortality risk. A serum K interval of 4.1 to 4.4 mmol/L was associated with the lowest risk of death.

Serum potassium and sodium represent the internal environment of the body, and the balance of the two plays a vital role in the regulation of blood pressure. Na:K ratio is obtained by dividing serum Na value by serum K value.

Studies have suggested that the Na:K ratio could serve as a prognostic marker of cardiovascular disease (CVD), however these looked at dietary intake rather than serum levels. A systematic review and meta-analysis investigated the association[i] between serum Na:K ratio and blood pressure and confirmed that a lower sodium to potassium ratio was associated with a remarkable reduction in systolic and diastolic blood pressure in adults and suggests a lower sodium:potassium diet to be beneficial for blood pressure control.

One study suggested that elevated plasma Na:K ratio could be used as a better indicator for hypertension than either Na or K alone[ii].

A low Na:K ratio can indicate a loss of K into the interstitial space, as tissue is broken down and cells are destroyed. A low ratio is associated with adrenal insufficiency, impaired glucose tolerance, infections, impaired digestion (resulting in breakdown of protein for conversion into sugar to maintain adequate energy production levels)[iii]

Elevated Na:K ratio could indicate acute stress as increased adrenal activity and aldosterone production cause Na to be retained in the body, causing serum levels to increase while more K is excreted.

Electrolytes enter into circulation through the digestive tract; in healthy conditions excretion is mainly handled by the kidneys, with lower amounts lost in feces and sweat. In unhealthy conditions or after prolonged stress, you may observe:

It is an acknowledged mortality predictor, and a recent meta-analysis has confirmed that its improvement is independently associated with the reduction of all-cause mortality risk.

Hyponatremia reported in existing, active infections. The most common infections associated with hyponatremia were bacterial and viral (influenza and respiratory viruses, including the most recent COVID-19; HIV disease or AIDS). Low serum sodium was a common finding in bacterial infections and both DNA and RNA viruses are known to affect the Na+K+-ATPase, however the aetiology remains unclear. It could be associated with the infection itself but other factors such as medications, malnutrition, renal or intracranial pathologies often coexist[iv];[v].

A recent study on non-ICU COVID19 patients found Na to be inversely related to IL-6 (released by monocytes and macrophages), possibly through IL-6 inducing non-osmotic release of vasopressin but further studies are required to confirm this[vi].

Often seen in long and high intensity physical activity, copious loss of hypotonic fluid would be expected to concentrate and raise serum Na but the opposite is often observed.

Loss of sodium through sweat or overconsumption of hypotonic fluids can impact serum Na.

Disturbances in the suppression of hormone AVP (arginine vasopressin, regulator of water excretion) can lead to inappropriate water retention. If paired with excessive water intake it might lead to hyponatremia. Stimulation of AVP can also occur as the result of increased inflammatory cytokine IL-6, which also tends to elevated during exercise[vii].

A study aimed at identifying the effects of hypothyroidism on lipid, electrolyte and mineral status found blood sodium levels to be significantly lower in hypothyroid cases compared to controls.

The study also found a negative correlation between serum TSH and serum sodium and potassium, the higher the TSH levels, the lower serum Na and K. This could be the result of suppressed Plasma Renin Activity and Plasma Aldosterone and subsequent exaggerated Na excretion. Reduced serum K, although not statistically significant, was also observed in hypothyroid patients[viii].

Other markers to consider in relation to electrolytes

Electrolytes are an important indicator of the load your client is dealing with and how their body systems are responding to that load. By managing electrolytes, you could support your clients to be more resilient to daily stressors and thrive.

If you’re not currently a member of our expert cohort of practitioners and want first look at more in depth insights like these, make sure you register as an FDX Practitioner today. It’s as easy as 1, 2, 3! 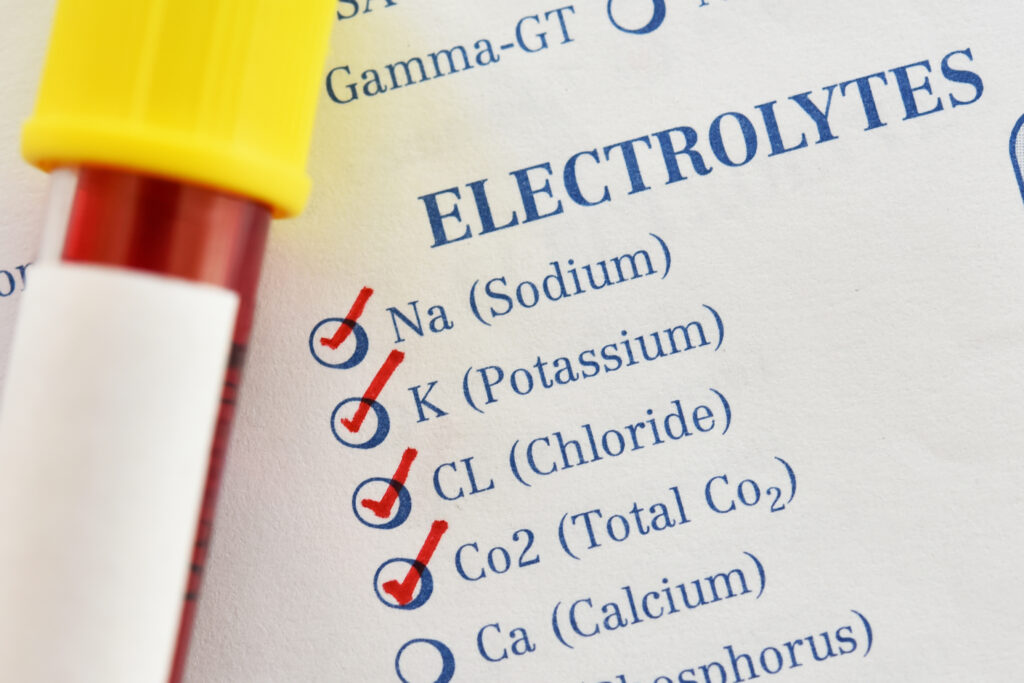